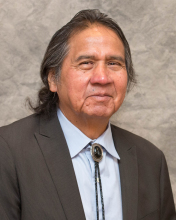 Frank LaMere was selected by local Native American organizations and leaders to speak during the shared keynote. In addition, Frank will lead a 40 minute follow-up discussion/presentation in one of the Issue Rooms. Mr. LaMere will participate through video-conferencing.

Frank LaMere has built not just a career, but a life on the principles of fighting for people and families who face injustice. An elder in the Winnebago tribe, Frank has an indomitable sense of family, community, and the dignity that lifts them up and makes them strong.

As the Executive Director of the Four Directions Community Center in Sioux City, Iowa, Frank has fought for the rights of children and families in his home community within the Iowa and Nebraska foster care systems.

He was a member of the American Indian Movement(AIM) in the 1970s.

More recently he was “one of the architects of the effort to shutdown Whiteclay,"

LaMere is a leader in the Democratic Party, and has served as chairman of the National Native American Caucus and been a delegate to the Democratic National Convention seven consecutive times from 1988 to 2012. LaMere is active in groups opposing the Keystone XL pipeline. La Mere was elected first associate chair of the Nebraska Democratic Party in 2016.