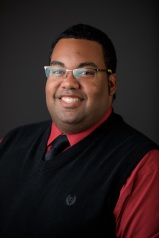 Andrew Aleman was selected by local LGBTQIA+ organizations and leaders to speak during the shared keynote. In addition, Andrew will lead a 40 minute follow-up discussion/presentation in one of the Issue Rooms.

Andrew (He|Him|His) holds both a Bachelor’s and Master’s Degree in Social Work from the Grace Abbott School of Social Work at the University of Nebraska at Omaha (UNO). Currently, Andrew serves as UNO’s Deputy Title IX Coordinator/Investigator. He is also a member of the University’s Safe Space Committee which allows him to provide Safe Space trainings on and off campus, serve as an advisor to the 2018 Midwest Bisexual Lesbian Gay Transgender Ally College Conference (MBLGTACC), and advise a student group for LGBTQ+ students of color. In addition to his roles at UNO, Andrew has worked as a Mental Health Therapist for the last three years, focusing on LGBTQ youth, young adults, and their families.

Community based work is extremely important to Andrew. In 2016 Andrew joined the Board of Directors for GLSEN Omaha. In this role, he has served as Co-Chair for both the 2017 & 2018 Corn This Way LGBTQ Youth Summit. Andrew also previously served on the National Association of Social Workers Board of Directors- Nebraska Chapter (NASW-NE). Currently, he is a Co-Chair for the NASW Nebraska Annual Conference. In June 2018, Heartland Pride honored Andrew with the Brad Fuglei Impact Award as, “An individual who exemplifies leadership and strength in our community with a focus on LGBTQ youth.” Through his work, Andrew’s primary goal is to create safe and equitable spaces where all young people, especially Queer and Transgender People of Color (QTPoC), feel supported and uplifted.